Does G*D Finally have a Pronouncable Name? 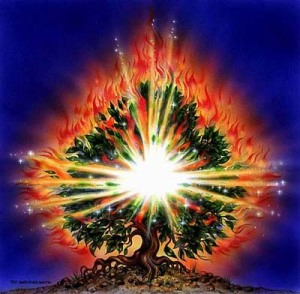 I guess when you are wandering in the desert around Horeb tending your Father – in- law’s flocks and you suddenly hear a voice speaking to you from a bush – which appears to be burning, but is not being consumed by the flames, you would do one of three things… well I would!

(c)  I’d take a closer look and see if I could figure out what was really going on.

Moses took the third option and the rest – as they say is history! But Moses was also an inquisitive kind of fellow and he wanted to make certain that he could relate the entire story correctly, when asked about it by his fellow Israelites.

The voice speaking to Moses from the flames told him that He was the God of his ancestors, Abraham, Isaac and Jacob. But still Moses insisted on a name which he could give to them. God said to Moses, “I am who I am. This is what you are to say to the Israelites: ‘I am has sent me to you. (Ex 3:14) That may have seemed a tad vague to Moses so G*D told him in verse 15 – in no uncertain terms:

“This is my name forever,
the name you shall call me
from generation to generation.”

One must wonder if by this time Moses was scratching his head (metaphorically).  Certainly he would have known the ancient stories about his ancestors Abraham, Isaac and Jacob, no doubt they would have been campsite stories told regularly, in the evenings after a hard day’s work. But here he was, confronted with the Real McCoy. The G*D of his ancestors, sought him out specifically, and had a major task for him to do. Who was going to believe this one when he told them?

I suspect G*D knew this was not going to be an easy task for Moses, so He told him in no uncertain terms I AM WHO I SAY I AM.  I don’t know if I personally could have coped with this revelation, I guess if I hadn’t been dumb struck I would have had so many other questions, whereas Moses, after a bit of arguing (well one would not really argue with G*D), toing and froing maybe a better descriptor (see Exodus 4) accepts his mission.

I have heard it said that in those times, knowing a person’s name gave you power over them. It seems a little simplistic and unreal that G*D wouldn’t tell Moses His name because Moses would have had power over the Almighty!

I would rather think that ultimately, what it means is that He has within Himself sufficient cause for His own existence without any prior cause. He is the uncreated Creator, the uncaused First Cause, eternal and self-existing, transcending both space and time. He (just) IS!

Actually when you think about it, names are descriptors in that they have meanings, describing the personality, relationship or even the profession of the person. One site tells us the meaning and history of the name MOSES:

From the Hebrew name מֹשֶׁה (Mosheh) which is most likely derived from Egyptian mes meaning “son”, but could also possibly mean “deliver” in Hebrew. The meaning suggested in the Old Testament of “drew out” from Hebrew משה (mashah) is probably an invented etymology. The biblical Moses was drawn out of the Nile by the pharaoh’s daughter. He led the Jews out of captivity in Egypt and received the Ten Commandments from God.

In England, this name has been commonly used by Christians since the Protestant Reformation, though it had long been popular among Jews.

YHVH is the personal name of God and his most frequent designation, occurring over 6,800 times. This is the Ineffable Name or Unutterable Name of the God of Israel. Because it is composed from the four Hebrew letters Yod, Hey, Vav, and Hey, it is also referred to as the “Tetragrammaton,” which simply means “the four letters When God commissioned Moses to be Israel’s liberator from the bondage of Pharaoh’s Egypt, he asked for God’s Name in order to validate his God-given role to the children of Israel. God simply answered Moses, “ehyeh-asher-ehyeh,” “I AM THAT I AM”.

No other name or explanation is required!

Today when reading through the news I came across a report that scientists at CERN have just announced that there will be a seminar on the 4th of July, at which an update on the search for the Higgs boson will be given. We’ve been collecting collisions for the last few months, up until last Monday, and hopefully we will manage to analyze them to look for signs of the Higgs (via at least a couple of the ways it might decay).

You may be more familiar with the term The God Particle, which has been bandied about in various news media recently. I was never happy with the terminology, but it seems to have stuck with the current generation.

So can I define in simple terms what this ‘particle’ is that the scientists and physicists at CERN using the Large Particle Accelerator in Switzerland are all waiting to find and announce with baited breath? Sure I can.

The collider’s purpose is to recreate, on a tiny scale, the instant of Genesis

Genesis, the moment when YVHW spoke and Creation occurred.

You see in my most humble opinion, human kind has never been able to accept that Our Creator is superior to us. From the time of the hissing snake in Eden, to the Tower of Babel and right down to this current day, we have continued to believe the lies of satan.

Satan told Eve that God has withheld the truth from them and that if she eats the fruit of the tree she would see the truth and she would become like God. (link)

Eve succumbed as did Adam, and seemingly nothing much has changed. Look around you at the world today. Evil reigns supreme. Come Lord Jesus!

Do we really want to rename our Creator God “Higgs-Boson”? I don’t!

Deuteronomy 10:12-14 reminds us in plain speaking:

So if a Higgs Boson is found it will only be one other thing in this magnificent universe that belongs to Our Lord and Creator God.

My rock, my fortress and my deliverer; my God is my rock, in whom I take refuge. He is my shield and the horn of my salvation, my stronghold.

I don’t need any other name for my G*D.

5 Responses to Does G*D Finally have a Pronouncable Name?